Just a quick reminder, our last sew-in of the 2017-18 year will be this coming Saturday, May 26th from 10am to 4pm at the CRCS St-Zotique. The forecast for Saturday shows warm but rainy, a perfect afternoon to stay inside and do some sewing! Bring your projects along and join us for the last sew-in of the season. 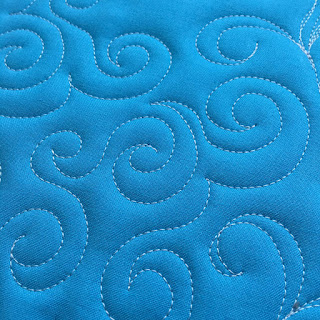 For those that are interested, Izzy will be giving a demonstration on free-motion quilting and sharing some of her tips and tricks. If you would like to learn how to do it, or are just looking for some tips or inspiration, join us for her demo after lunch.

Though the pattern was first published in the United States in the early 1920s, the quilt pattern can be found as early as the late 19th Century. The Double Wedding Ring quilt pattern has long been a symbol of love and romance with its interlocking rings symbolizing marriage. The quilt was traditionally made by mothers and grandmothers for their children and given as gifts on their wedding day or anniversaries. Due to the popularity and romantic history of the quilt, many families treasure these quilts and pass them from generation to generation.


Love and Quilting in the Depression Era

The pattern was especially popular during the Depression era, as it could be created using scraps of fabric from unused bedding or other projects. The same method can be used for your modern version if you’re looking to pair down the amount of scraps in your workplace or want to keep the pattern less formal than the more traditional colour scheme.

Regardless of the fabric it was made of, old American folklore suggests that a marriage was blessed if the couple spent their first night together under a Double Wedding Ring quilt, signifying its importance as a traditional wedding gift. It’s doubtful that you’d catch any children playing on such a quilt during this time, due to its importance.


A Modern, Creative Twist on an Old Quilt Pattern

Modern quilters have taken the traditional quilt design and added their own creative inspiration to it. While each quilt still maintains the appearance of the interlocking rings, diverse types and sizes of fabric can create a design that’s unique to the taste of the quilter. Many quilters have also bucked tradition by using a different, bolder colour than white, such as black or blue, for the background. The nontraditional colour choice gives the entire quilt a much quirkier vibe.

Due to the complexity of the pattern, the Double Wedding Ring quilt might be a hard one for beginners to attempt. It includes a lot of moving parts and can be frustrating on the first try but if you stick with it, you’ll be left with a gorgeous quilt that you can give as a gift to the loved ones in your life. Some quilters have even pulled together heirloom scraps of baby clothes and other cherished pieces of fabric add another sentimental element to the anniversary quilts made in this pattern.


If you’re getting bogged down by trying to create a fresh take on an old favourite, just stick to the original pattern and try out varied colour schemes or pull from your scrap pile.


Regardless of your spin on the design, the circular pattern set against an open background makes for a pleasing piece of patchwork that will be an enduring staple in your home.

For some tips on making a Double Wedding Ring Quilt, check out this post:  http://www.joscountryjunction.com/tips-for-double-wedding-ring-quilt/

We get a lot of questions about where to shop for fabric or quilting supplies here in Montreal, both from visitors and locals, but sadly, th... 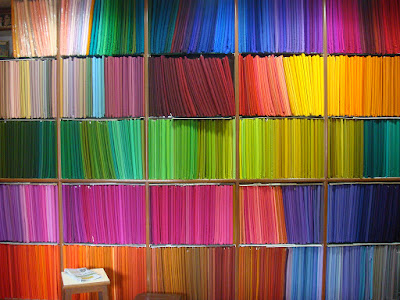